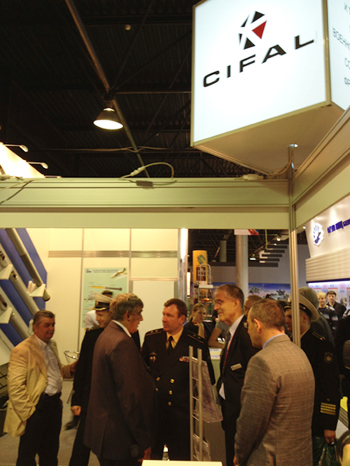 CIFAL participated in the 2nd edition of the 2012 Engineering Technologies Forum in Moscow. For five days, this world class trade show dedicated to the Russian security and defense industry attracted more than 300 companies from 103 countries. The forum included a number of international conferences. Some 250 members from official delegations and 3,000 experts and specialists participated in the Forum.

At the official opening, Gilles Remy, Chairman & CEO of CIFAL, participated in the Plenary Session in the presence of Denis Manturov, Russian Minister of Industry and Trade, Alexandre Fomine, Director of the Federal Department for Military/Technical Collaboration, and Igor Sevastianov, Deputy General Manager of ROSOBORONEXPORT.

The five days were an opportunity for many constructive discussions with a number of representatives from Russian firms looking for industrial partnerships and collaborations with French companies in the industry.

The professional visitors were able to learn about the range of business and industrial services specially developed by CIFAL in Russia, in particular the translation and interpretation services offered by CIT (a CIFAL business unit). The reputation of CIT in the management of the BPC-R Mistral translation project caught the interest of several industrial corporations working on projects of a similar scope in Russia.