Translation of the article published in “Neytralni Turkmenistan” (dispatch from Turkmen State news agency – TDH) on May 10, 2012.

THE PRESIDENT OF TURKMENISTAN HOSTED THE CHAIRMAN OF THE COMPANY CIFAL

The businessman thanked the Turkmen head of state for his time and declared that he was very pleased to be able to discuss current issues relative to a mutually beneficial and long-term collaboration in this private meeting.

After welcoming his guest, President Gurbanguly Berdymukhamedov expressed his pleasure in receiving in Turkmenistan the representative of a leading French company, with which there is already a close ongoing partnership.

As the CIFAL Chairman noted, the growing interest shown by large French companies in Turkmenistan is highly connected to the country’s sustained socio-economic development dynamic and its attractive investment policies. In this regard, Gilles Remy indicated that his company would like to intensify the productive collaboration that has been actively developed with Turkmenistan over close to 20 years. As it is known, CIFAL operates in a number of fields, and more particularly in energy, industrial and civil construction, communications and electronics, and consulting and expertise services. The French firm also views agriculture – in particular cotton growing – as one of the profitable drivers of a mutually beneficial partnership, considering that Turkmen cotton production is one of the most competitive on the global market.

Opportunities for joint projects in several key areas were discussed during the meeting. After emphasizing that Turkmenistan was always open to establishing mutually beneficial business ties, especially with leading representatives of the international business community, the country’s leader reiterated that the Turkmen nation was strongly committed to the introduction of cutting-edge technologies and the use of experience of foreign experts in the various spheres of the national economy.

At the end of the meeting, the Turkmen President and his guest wished each other success, after reasserting their mutual interest in working together, taking account of the country’s priorities in socio-economic development and its large-scale transformation programs. 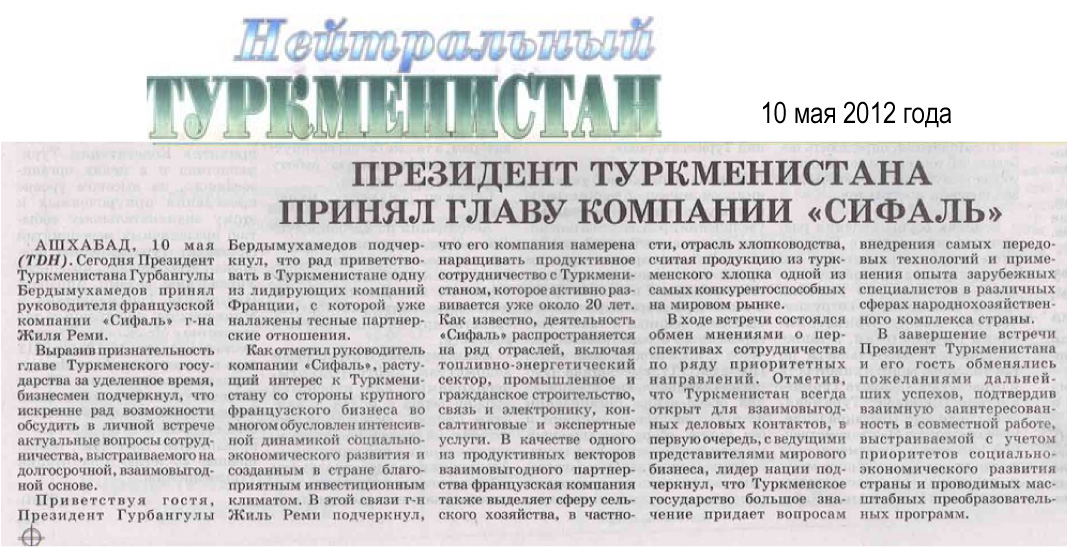